Creative groups deal with a simple theme which is then used as the plot in a number of video clips. The theme is: “the end of the world is coming” and the stage is Cava de’ Tirreni and its surroundings, where coffee is a basic element in the daily life of the people. In the movie coffee becomes the “final desire” before the world comes to an end.

Short stories, often presented as a series of clips filmed in different places: people fighting for the last coffee cup; metaphysic images that link the public to alternative dimensions of life; walks through desert urban landscapes until arriving at the only living place: a bar. Intimate moments shot through a keyhole, ghosts coming out of a digital connection which is too weak, and the local best delicacy: the babà, as a trigger for the final moment on this planet.

Each of these short movies is visible in the place where the idea has been conceptualised and shot, as a multiplier of dimensions, spaces, experiences, like something that could happen or maybe has already happened?!

Our AR movie is an experiment on several simultaneous timeline history, about the End of the World. The title is an umbrella to select things, people, concepts that in someway are important for the workshop participants such as we experienced it.

…. but thinking about pizza…. 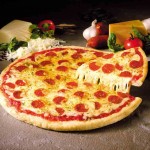